It was impossible to get my usual early start this morning as I needed to buy food, however the supermarket doesn’t open until 8am. That’s OK, it provides the perfect excuse to hang around town for a bit in the morning and head to a cafe for a cooked breakfast.

Just before heading for breaky I saw Breezy and Baby Blanket across the road sipping on coffees from a small window coffee shop. Joining them I got the low down on their digs for the night – the local park and playground – where they were woken by the sprinklers and got saturated. The joys of being young and travelling on a budget. I’ve been there before but thoroughly enjoyed my sleep in a hotel bed and the warm shower. They are headed off trail for a few days to climb Mt Shasta. Hope they catch me because they are awesome to hang out with. We parted ways with the hiker fist pump 🤜 🤛 and ‘Happy Trails’.

With breakfast done I headed to the supermarket for food. It was really small and resupplying was a fairly difficult affair. It looks like they haven’t restocked the shelves in a while and there wasn’t a lot of choice. I’ll get by for the next six days but the food is going to suck.

Checking out I headed for the freeway. There are no buses, no taxi service, no Uber and no roads back to the trail head so walking on the freeway was one of my only options. I like being independent and don’t like hassling trail angels for rides. I’m fairly sure you’re not meant to walk on the freeways in California either but what other option was there?

There was a Chevron gas station along the way and I popped in to see what they had. Surprising better options than the IGA in terms of bars so I grabbed a few of my staples – Cliff Bars, Lara and Luna Bars.

Starting the 4 mile walk back to the trail head I only got a half mile in when a pickup truck pulls up next to me crammed with a full load of other hikers. I throw my pack in the tray and they make room for me inside. Awesome! I’ve seen a couple of the hikers over the last few days but I don’t know their names and don’t know how they got this ride. Not sure if the driver was a trail angel or they hitched. Either way I save a bit of time. And damn was it hot walking on the road.

On trail by 10:30am, it was difficult to get going. It was pretty much going to be climbing all day in the heat.

This heat is killing me. It’s not only the temperature, expected to peak at 104 degrees today, the humidity is maxed out and absolutely energy sapping. 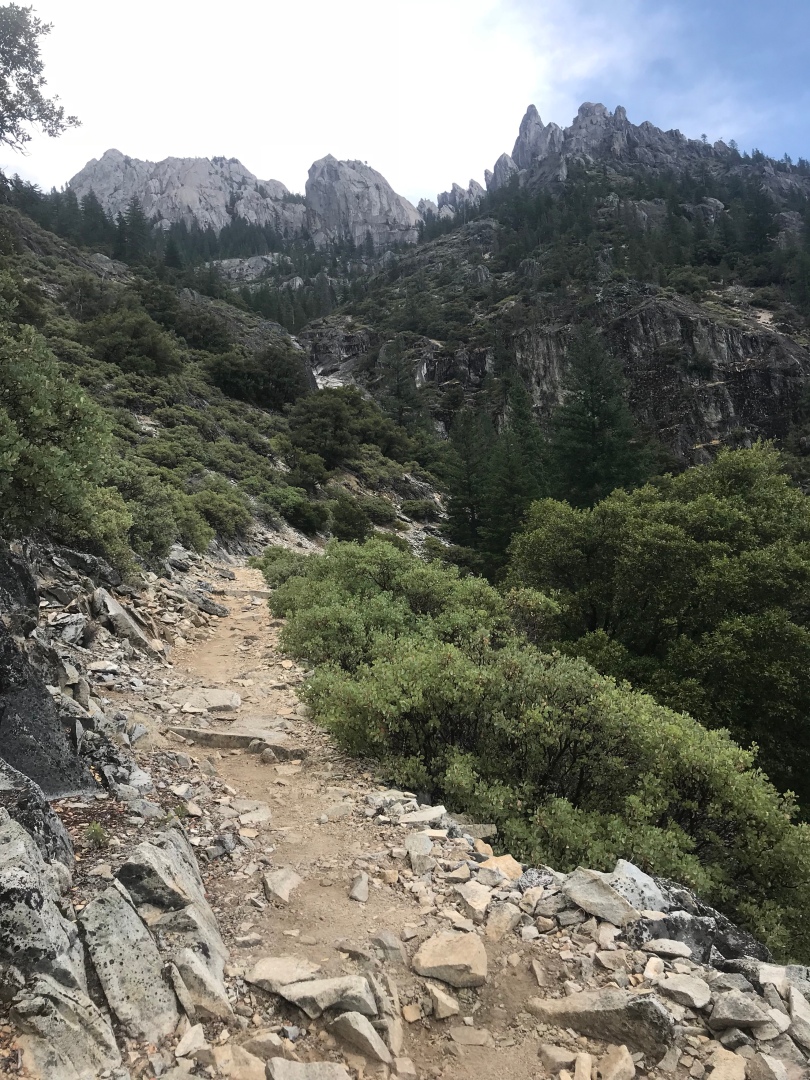 By late afternoon a huge build up of clouds, the same as yesterday, brought a few showers. Unfortunately the air remained horribly humid. No wind. No cool breeze with the rain. I was hoping that climbing high would bring some relief. No so. Who needs rain showers, all my clothes were fully soaked through with sweat.

Climbing was so difficult. I one point I could feel getting light headed and on the verge of fainting, promptly stopping in the only piece of shade I could find to cool down. Water over the head and a cool bandana placed on my neck. Give me a snow covered mountain any day and I’ll bound up it. You can take these crazy hot climbs away please.

I reckon I drank about a litre of water an hour, always stopping at the springs, seeps and creeks to collect fresh cold water and ensure I had enough water. You know you’re onto the good stuff when your bottles condense on the outside once the water is in. A lot of hat dipping as well.

Given the later start and the insane heat I was happy with around 18 miles today. I’ll get an early start tomorrow to make up some ground.

Despite the heat, the views were amazing. It’s just a pity my focus was on survival and not on taking more pictures.