I can’t do the midday heat anymore. It is absolutely debilitating and requires carrying far too much water. Hiking in the sun you’re delirious by 4pm and the sun still beats down well into the evening.

I needed a new strategy to adapt to the desert, I can’t fight it. So this morning I was up at 3:30am and out the gate by 4 am with the aim to get as many miles in before midday as I could, wait out the heat, snoozing in the shade and continue on into the evening from around 5pm.

Actually I was aiming to get to Mike’s Place by midday, a full 18 miles and a full days hiking for the average punter.

Leaving in the cool morning air was awesome! The miles came quickly and I didn’t have to touch water for 2 hours, although I did ‘camel up’ before leaving Warner Springs.

Granted I didn’t see a lot other than the trail gliding away under the narrow beam of torch light.

By 5:30am the first signs of the sun appeared and I could see without the artificial light, the trail leading up for a major climb. I’m glade to be doing this in the cool rather than the heat.

Into some new terrain, the trail lead up and through massive rock formations. Plenty of shade to be had under the rocks but not needed just yet.

By 9am the sweat was starting to pour out on the ascent up. My umbrella coming in handy again. It must be at least 10C cooler under that thing.

By 10am I’d completed 12 miles and had a chance to pause for a short break watching 6 eagles soar on the thermals – or are they buzzards circling above what they think will be prey, me?

The last 6 miles were a chore. Up, up and up. The new shoes didn’t let me down.

By 12:30pm I had made it the full 18 miles to Mike’s Place, another awesome individual who has opened up his place to hikers as a place to rest up out of the boiling afternoon sun. On arrival I was tossed a plate of hashed potatoes, onions and a hotdogs, plus a cold soda. And watermelon. Unbelievable. This is an important water resupply for most and as I write this there must by 25 hikers sleeping out the heat, getting rested up to put another stint in the evening. 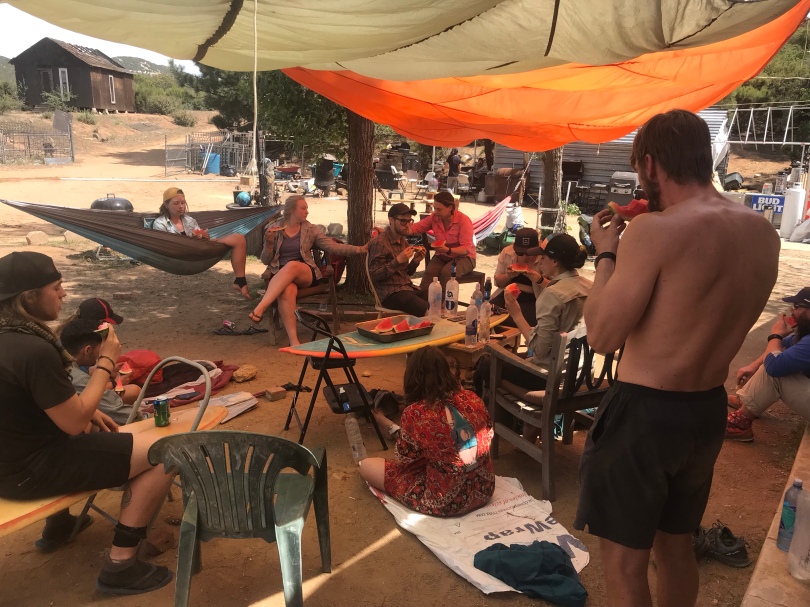 I’ve walked more than most today and haven’t got a huge second wind for the evening, maybe another 6 miles.

Water sources are few and far between at the moment so I’ll drink up plenty, restock and carry an extra litre tonight as the next water source is a bit suss but I’ll have enough to get through to the next water.

Postscript: I managed to get in another 4 miles in the evening until my feet said they were done for the day. That’s 22 miles for the day (35km) and in brand new shoes. I’m impressed.