I was so very ready for today. It would mark reaching my finish point from last year and finally making some in roads into that elusive last 70 miles that I have obsessed about for the last 12 months.

Up at the crack of dawn, I made quick work of the danish and coffee cake I purchased from the bakery yesterday and downed a cold mix coffee.

With a kick in my step I was on the trail by 6am. The early starts are great for me. It means I can make use of the cool early morning air and get some miles in. I’m always aiming to get 10 miles in by 10am.

Today would be all up hill, 20 miles of ascending but the terrain was great and the grade was perfect for a steady paced day.

Rather than cool morning air it was really humid, hot and sticky. Blue sky could be seen but many a storm cloud hung low over the surrounding peaks. Only around 2 miles in the first claps of thunder could be heard booming and reverberating through the valley. Rain drops shortly followed. Light at first with the occasional heavier shower. It was so damn humid I didn’t bother with any rain gear as I’d only swelter underneath and be saturated anyway. Carefree walking inthe rain was the way to go.

Some sections of trail were overgrown and the encroaching vegetation that had collected the rain brushed it all onto me. I ended up saturated. The beauty of quick drying hiking clothes though is all you need is a bit of sun or wind and you are dry.

Showers continued intermittently through the morning but had stopped by the time I’d reached Rainy Pass.

The small border monument that a trail angel had created to mark the end of the PCT at Rainy Pass last year was still in place, Canadian flag flying proudly. This is it. This was my finish point last year. 61.5 miles left to reach the Canadian border plus 8 to make it out Manning Park, roughly 70 miles.

Reaching Rainy Pass by 12:30 it was time for lunch. There is not much there, trail head carpark and some pit toilets. When ever there is a sit down toilet you have to make use of it even if you don’t need to go.

Entering new ground I was blown away by the standard of trail and the perfect grade for climbing. It didn’t take long to start crossing many small creeks, crystal clear, snow melt waters cascading down over boulders. All were dry foot crossings on perfectly placed rocks.

The climbing continued, through the forest at first which was great for shade but offered no wind to cool down. Soon enough the terrain before opened up into an amphitheater of jagged peaks and scree fields, the trail slowly switchbacking up towards Cut Throat Pass.

I passed quite a few people on my climb up, their descent, but I don’t think I saw any south bounders today. Everyone I bumped into were either too clean or had the wrong gear to be thru hikers. We’ll see. It is getting towards the end of July and the south bound herd should be thinning but I thought I was bound to run into a few.

I was paying close attention to my mapping app as I climbed as there was one last stream that I could collect water from for the night. No additional water sources before my next camp. The last comment associated with that water point marker was two weeks old and it said “Great flow.” How disappointed I was to reach it and find that it was since dwindled to a slow trickle with most of the snow melt feeding it long since gone. Damn! What to do? I scouted up stream a little and found the tiniest of trickles, just enough to get my bottles under and patiently wait for them to fill. Crisis averted. I quickly updated the comment so others behind me didn’t have the same disappointment.

The views from Cut Throat Pass we’re out of this world and I couldn’t put the camera down. Just this section alone has made the effort to come back to the North Cascades all worth it and I’m sure there is more to come.

Once on top, the final 2 miles were steeply down more switchbacks to a small saddle that I’m calling home for the night.

Can wait to see what tomorrow brings. Only 53 miles to go! 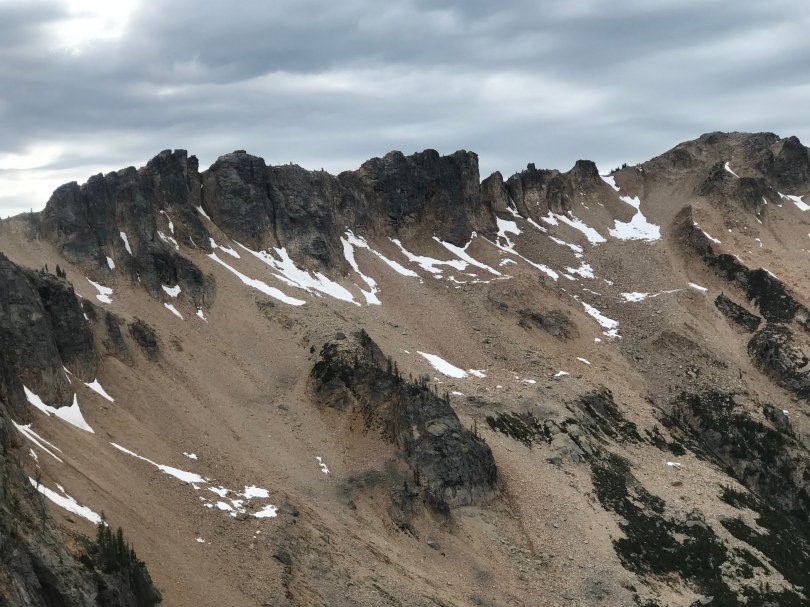