I woke early to the sound of rain drops on my tent but that would not bring my spirts down today. Waiting for it to ease a little I snuggled down in my sleeping bag and ate breakfast in bed.

It was freezing this morning. A bitter breeze rolled through the saddle I was camped on. The rain stopped soon enough and gave me an opportunity to pack camp up, albeit with a went tent, there was no sun shining through just yet to allow me to dry it.

I rugged up early with rain gear on, more as a wind barrier than to ward off any moisture. And for the first time the gloves came out. My hands were purple by the time I had the tent down and packed up.

The morning hiking session was easy enough, traversing the mid slope of a mountain for a few miles before descending down to a valley. Several tents were setup in the valley, the occupants nowhere to be seen waiting out the cold no doubt.

From the valley it was a short but steep climb to Methow Pass. A short distance into the climb I had well and truly warmed up and the layers started to come off.

On top of the pass the views like most places through Washington were amazing.

Off the pass it was a five mile descent. Pretty much all of Washington is climb up and climb back down. That did not bother me as the trail was perfect and well graded.

Towards the bottom I met a young German guy stopped in the middle of the track trying to catch his breath as he was headed up gill. I didn’t catch his name. “I’m having a rough start” he tells me. Obviously a fresh south-bounder he was struggling big time under the burden of his giantic pack. Only a few days in he was in a world of hurt. Some people you can just tell from first glance are not going to make the distance. I hope this one proves me wrong.

From the bottom of this new valley with the Methow River running through it was all up hill again. This climb the biggest I will have to do before the end. 6 miles up hill following a multitude of switchbacks up, up and up. I’ve really come to appreciate switchbacks. I used to hate them, thinking they added so much more unnecessary distance but when graded properly they certainly make it easier than trudging straight up and down like at home.

The veg was super thick at the start of the climb and difficult to see very far in front. I surprised a group of three headed down hill – they thought I was a bear and promptly got stuck into me for not making enough noise. Apparently it’s my fault that they got scarred and my responsibility to make more noise to let them know I was human and not a bear. Dickheads. I loaded some ACDC onto my phone and cranked it up to level 11 as they approached. The bells attached to their packs twinkled continuously as they passed.

It was a long slow climb up and great to finally have made it to the top knowing there are no big climbs like that again. From here on it there are climbs but all are short.

Chowing down a well earned lunch on top it was pretty all down hill from there. 7 more miles to Hart’s Pass and around 30 miles from the border. 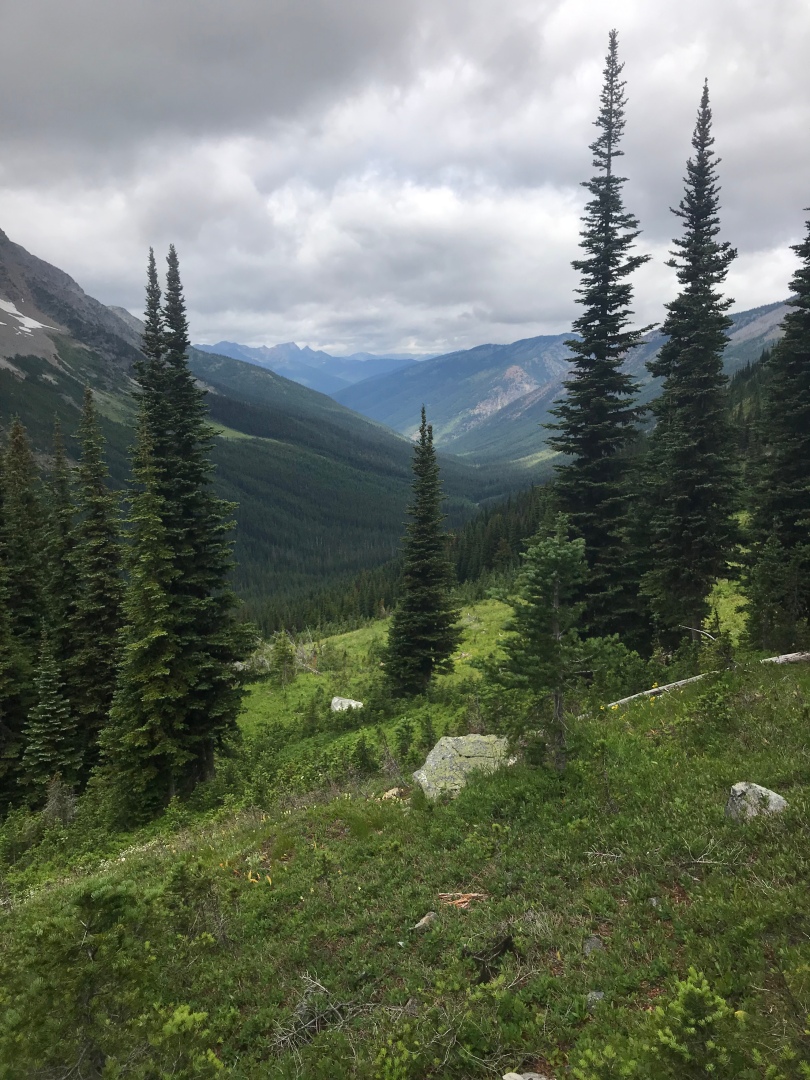