Plus 1.4 miles Burney Falls side trail

The forecast for the week is hot, hot and very hot. All days this week are above 💯 Fahrenheit. Yikes. There is no escaping it. That is very high 30’s to low 40’s for everyone at home.

Luckily today I was able to get a ride out to trail head at 6am with hotel owner. A German couple also staying at the hotel who I’d seen off and on over the last week also jumped on board. Getting an early start was great.

It was flat and fast to Burney Falls. The falls aren’t actually on the PCT but the trail swings right by and there is a short side trail that takes you into the park with a 1.4 mile loop walk around the falls.

They would have to be the highlight today. Multiple underground passages have been scoured out of the porous scoria rock over time and water pours out of the cliff face in a thousand places. 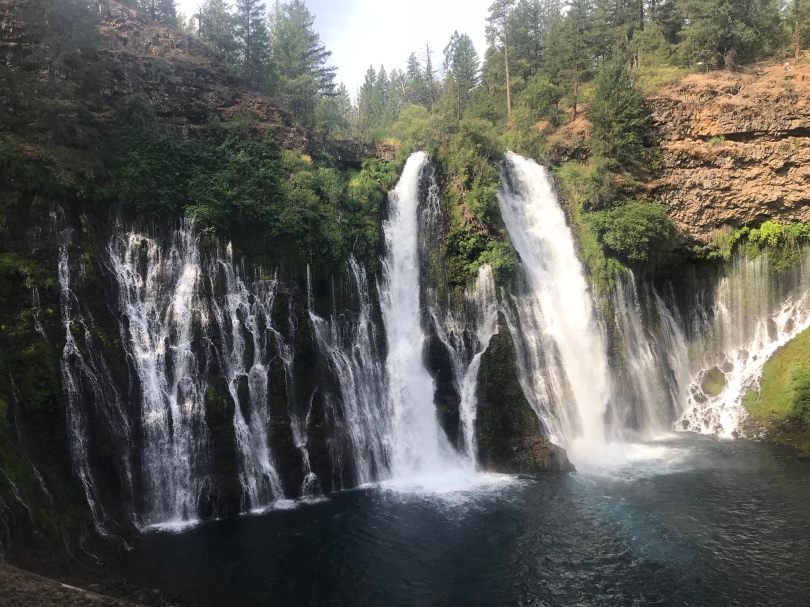 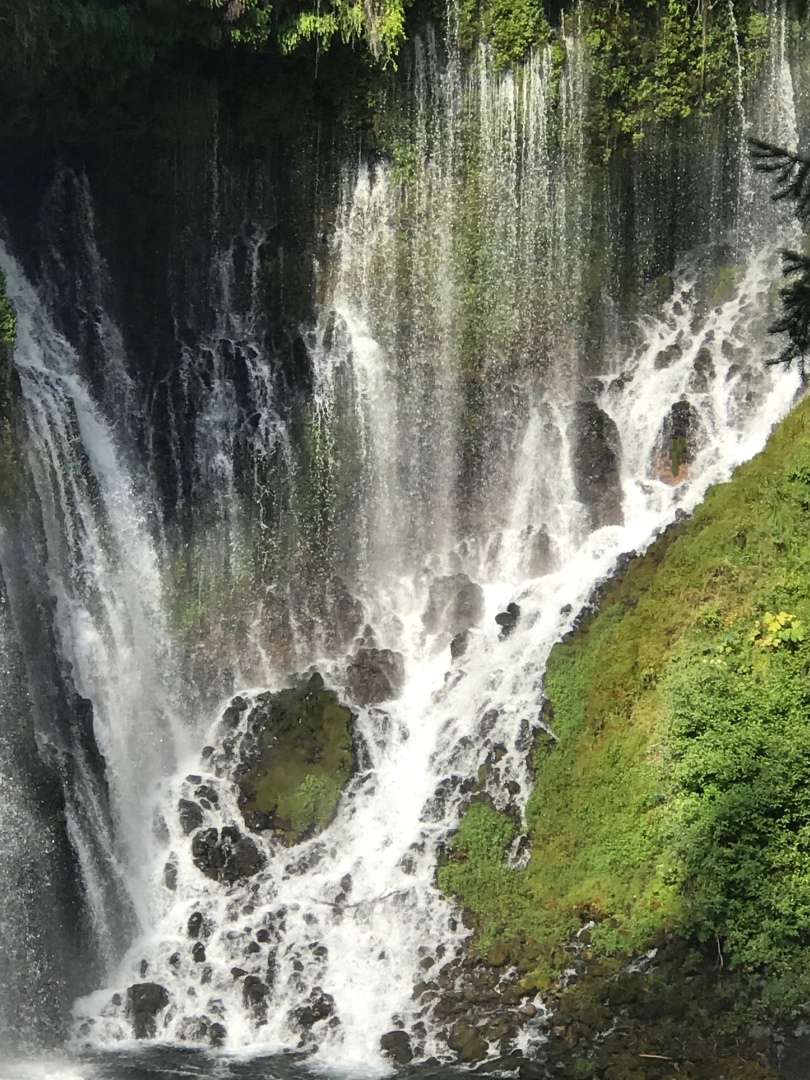 I’ve been walking on that same red scoria, crushed into a dense powder by thousands of previous feet that now clings thickly to my legs where sunscreen has been applied.

The park has a general store and it’s just about obligatory for PCT hikers to grab a snack at any opportunity so I paid them a visit and grabbed an ice coffee.

A large group of hikers unknown to me were sitting out the front obsessing over pack weights. Cleary a case of ‘packarexia’ as they all have smaller packs than mine yet have it in their heads that theirs are massive and need to be smaller. It’s an affliction that effects us all and I’ve got to say I’m always looking for ways to shed more weight.

From Burney Falls the next 8 miles or so were climbing and while it wasn’t particularly steep, the heat was oppressive and energy sapping. Saturated with sweet mid morning was not a good sign for the week ahead. There is no avoiding it. I can’t sit still for a week to let the heat pass, that is ‘if’ it does pass and not continue. I slowed my pace to conserve as much energy as possible.

During the climb I came across Mission who I haven’t seen since the Sierras. We walked and talked for a bit before I overtook him and continued one.

Climbing was tough but at least it brought with it a noticeable drop in temperature. Still it was a hot and muggy afternoon. Some cloud rolled in and acted like a lid to a cooler, keeping the air hot.

Concentration waned during the afternoon and it was a struggle to pay attention to the scenery around me. Eyes were firmly fixed on the trail in front, although not well enough to see a big rattle snake lying across the trail.

Luckily my primitive brain picked up the patterned skin and in a slip second distinguished between stick and snake causing an unconscious whole of body halt on the spot. It is amazing how the brain does this. The snake’s rattle kicked in and it moved off the trail, neck curled and head poised for a strike if need be. We moved out of each other’s way. No photo of the snake in question but here is a butterfly to calm the nerves. 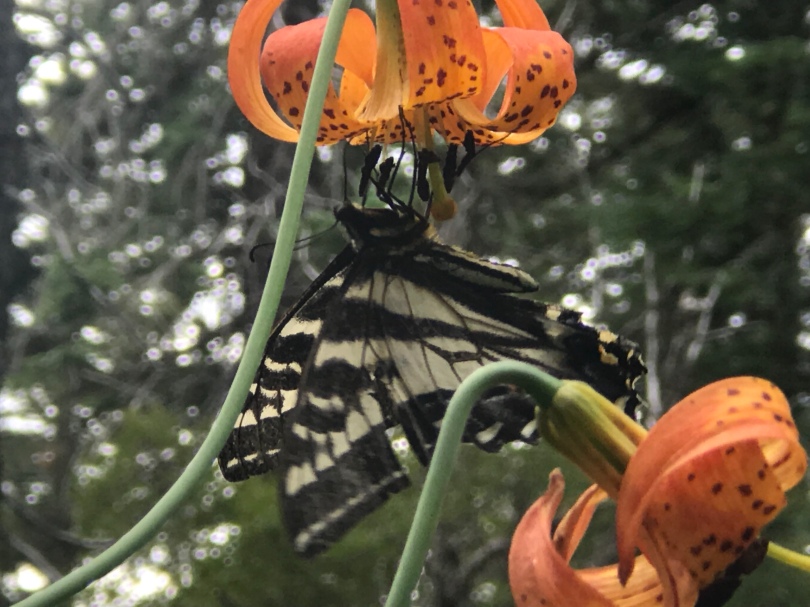 Towards 7pm I put in 30 miles and it was time to look for a camp. I found the perfect little camp for one up on a ridge line with an amazing view overlooking Mt Shasta. Sunrise should be superb. 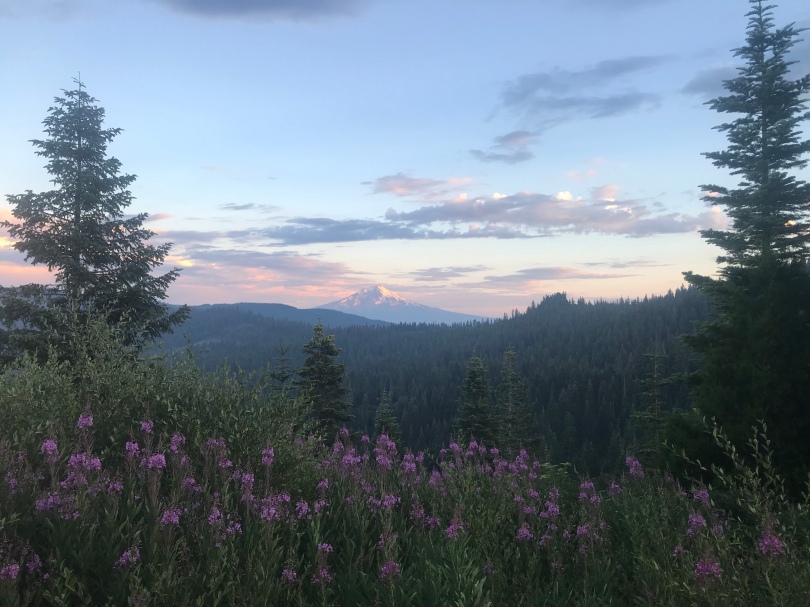