With only a few days left to go before I join the hiker herd I’m reminded of a uniquely New Zealand comedy drama Hunt for the Wilderpeople. With a lot of colloquialisms heaps of the gag lines are really only understood by Kiwi’s or Aussies but it is hilarious in my mind.  To cut a long story short, the movie basically follows the adventures of a young foster boy and his carer who go on the run from child services, taking to the bush for several months. They are on foot and constantly on the move, surviving as best they can and the young boy coins the term the Wilderpeople, using the analogy that Wildebeests migrate as a herd and that is what they are essentially doing; moving through the wild trying to evade danger, but that they are people, hence the term Wilderpeople. 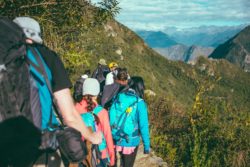 And that is essentially what the PCT hiker herd is – Wilderpeople. Hundreds of individual hikers, all migrating NOBO with the same goal of reaching Canada in a compressed space-time continuum. But the movement enmass is not the only shared characteristic with the migrating wildebeest. In the desert especially we are all on the hunt for water, dodging dangers (rattlers, poodle dog bush & heat) and moving to more fertile ground north. At the same time we all compete for resources in the form of hotel rooms in town, post office ques and camp sites. Maybe some are even on the hunt for mates.

I’m about the join the pack

Mid April is by far the busiest period on the PCT. The online skirmish to secure permits was particularly telling as mid April dates evaporated faster than sweat dripping onto a hot tin roof. But April wasn’t going to quite work for me. May was a much better fit. So, I’m about to join the hiker herd, albeit towards the back of the pack.

Because it is perfect!

See you out there next week.