A reasonable distanced day today but it felt like a half day. It was an opportunity to re-group, take the time for some self care and look ahead towards the end.

Keen to get moving and avoid the morning goup of 15 or so, I was up on first waking just after 5am. It is useless to try and dose with a heavy snorer on above bunk. I was off in the dark and straight onto fire trail at 6am for some fast kilometres, only one big climb for the morning up to the top of Mt Wells through a recentl fuel reduction burn.

Mt Wells is the site of an old fire spotting tower where the tower persons quarters had been convetered to a Bibbulmun Track shelter, smaller than most but a shelter nonetheless and somewhere to stay dry.

Approaching the top of the climb I came across a young father with two kids aged eight and ten. South bounders had told north bound hikers about this family.  They were out in preparation for a Cape to Cape hike in a few weeks, the father getting the kids use to all their gear, ensuring they would be comfortable hiking and camping, and sorting out any final issues over the long weekend. I was super impressed with the kids efforts in carry large packs. “Great to see Dad! There should be more of this.”, I said. We stopped to chat and it turns out there was a third child missing from this outing who would join them on the Cape to Cape, aged 6.

Only 15 minutes later I was on top of Mt Wells, surprising a group of four by arriving at the shelter so early and by the obvious early start. This lot were still eating breakfast and yet to move for the day. They were more impressed when I told them I wasn’t staying here and was pressing onto the next shelter, White Horse Hills. They were out for the long weekend as well.

The descent off the north side of Mt Wells was just as steep as the ascent I’d made up the south side, shifting straight back into fire trails. On the odd occassion the track showed promise with signs of transitioning into single track but they were all short lived moments. I was dissapointed every time with only really short sections of single track linking existing fire trails together or cutting off short corners of fire trail. Walking on fire trails has to be biggest bore of this Track.

The whole area I was walking in had been burn in a recent fuel reduction burn and it struck me that I’d walking through black since Chardora. A massive burn. I was still in the black 25km in for the day. 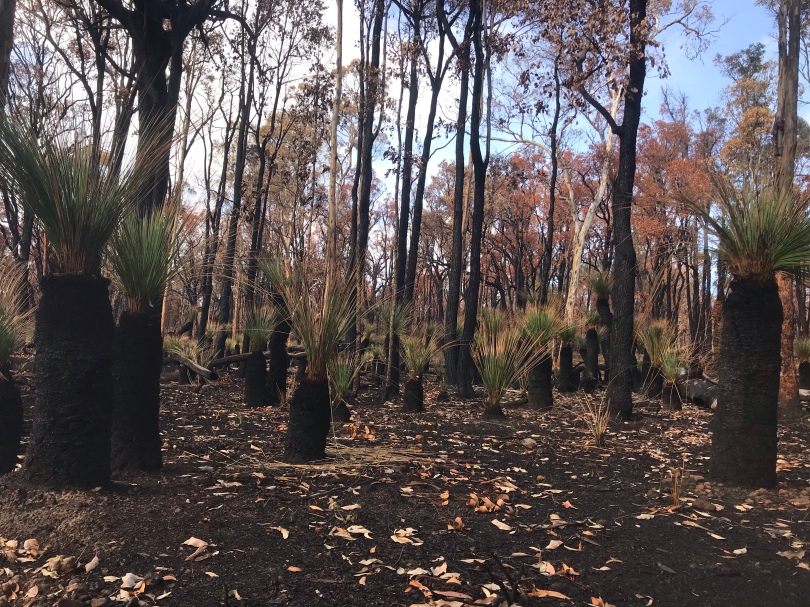 With four kilometers to go for the day the track relented, finally shifting off fire trail and onto single track, climbing steeply upwards to a natural feature – a granite capped hill with views all around. Finally a bit of a challenge, steepish climb on moderatley technical group and the first decent view in weeks.

Before reaching this point I was beginning to loose hope for the Bibbulumn. I was not loving it at all and forging ahead just to get it done. This 4km section of track completely lifted my spirits and re-invigorated my desire to finish the Bibb Track. Perhaps this was an indication of what to expect up ahead. I could only hope so.

The single track snaked its way through the granite features, picking a path over exposed granite plates, between rocks and burnt vegetation. Large granite boulders littered the hills side,  natural pieces of artwork to be admired in the soft sunlight. Many rock depressions holding recent rains.  The vibrant green of new shoots breaking through the orange dirt showing just how resilient the bush is to fire. 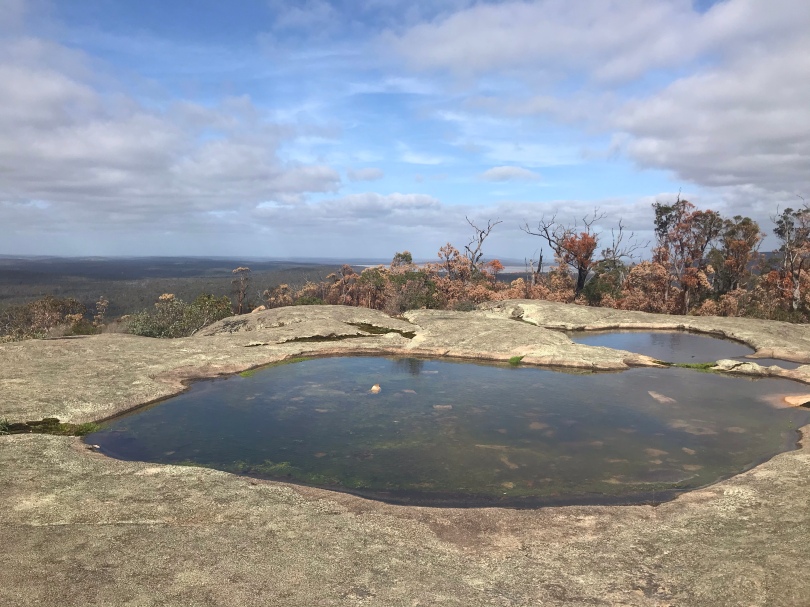 I arrived at White Horse Hills just around 1:30pm. It felt great to have walked the full distance of 29km in such a short time. It felt like a half day really.

Surprisingly the shelter was empty and there was a chance I could have the place to myself, the first time in weeks and very welcome after the inundation of the long weekend crowds. Just as quickly as they appeared on the Friday, they have dissapeared on the Monday.

I relished the silence. Sitting by the fire, drinking cups of tea and taking the time to reflect on this trip so far, now journalling in a note book in an effort to save battery life on my phone.

With the sun shining bright today and plenty of it remaining it was time for a ‘yard sale’. I spilled the contents of my pack, spread everything out to lay it in the sun and catch the warm rays. It is amazing how moisture has a way of finding its way into everything, at least I think it is. All my gear and clothing has a slightly damp to the touch feeling. It probably isn’t, it just feels that way.

With no-one around I took the opportunity to heat up some water,  stroll well away from the shelter (just in case someone did show up) and nude up for a well needed bush shower. Washing away four days of dirt and grime, scrubbng the face and body down with hot water felt awesome.

Once settled for the afternoon I had a minor moment of panic when trying to charge my phone. It’s always in flight mode to conserve as much power as possible and I have a battery bank that I’d held off on using as it would be the sole source of phone power until the end of track some 5 days away – no buildings to plug into to recharge. I had 8% left on my phone and thought it was time to charge off the battery bank.

I grabbed the battery bank out, plugged in, then…….nothing. No charge at all.  A very loud “Fuck!!!!” expelled from my lips with a guttural sound somewhere between a bloodcurdling death gurgle and a heavily pregant warthog birthing a sizeable litter, on the realisation that I’d have no phone charge, meaning no navigation to the end of this trip.   But what surprised the most was just how quickly that 5 seconds of panic was replaced with “Oh-well, fuck it. This will add a new element of challenge to the hike. Who needs a phone anyway. Just get up and walk each day. Follow the arrows. Its easy”.

Recognising the fact that this is the way things would be I went to packed the battery bank away, at which point the bastard flashed back to life.