Washington lived up to its name of being a rainy state on day one. Walking out the door the sky was gloomy grey and low cloud cover the tops of all the surrounding peaks. It was misting rain all over. I don’t think it’s going to last though and it’s expected to heat up again later in the week.

Walking up to the Bridge of the Gods felt amazing, another major milestone to have reached. I was on a high.

It’s a narrow bridge and much safer to walk into the direction of traffic. Cars slowed on approach. Peering through the steel lattice work under foot, the Columbia River churning away around 50ft below.

Welcome to Washington. I’m greeted by a large street sign on the northern side and smaller trail markers leading the way.

Entering the forest I’m immediately in love with Washington. Even with that short distance across the river a completely different forest type is entered. Much wetter over here evident by the moss covered everything, ferny understory and more complex forest structure. Long beard like tendrils of moss hang off just about every branch. Seasonally it is dry, even though it is rainy today and the plants tell that story in some yellowing but I can imagine the lush, vibrant greens that would spark the place after prolonged rain. 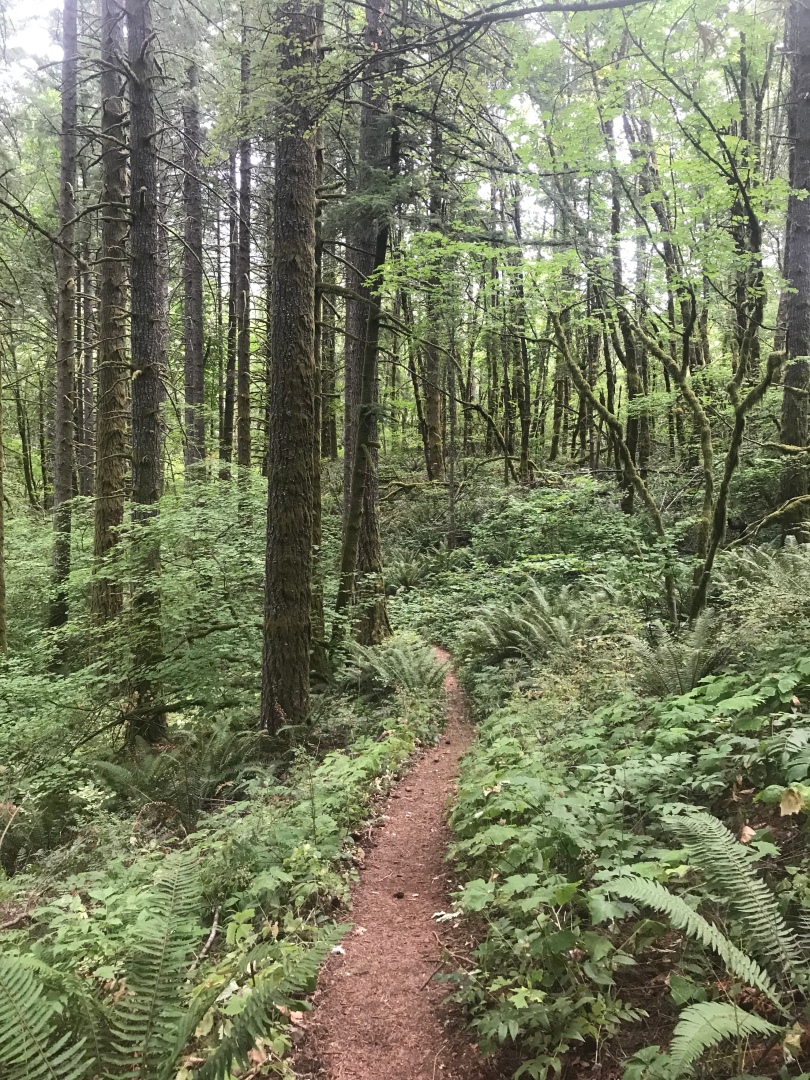 I was having a great day. Maybe because I haven’t really seen rain for more than five months (back home and on trail) I was loving it. Cool air for a change.

The mist and low cloud clung to all the vegetation on the side of the trail, brushing off onto bare legs in shorts and soaking shoes and socks. Patches of shrubs were shoulder height and rain catching on my shirt sleeves brushing past. Not wet enough to justify a shell layer yet I moved on. It was only when starting to hit longer patches of overgrown shrubs that I reached for my jacket, slowing the pace on a steep climb to avoid over sweating.

At lunch the heavens opened briefly and for a long time after any gust of wind would shake water loose from the trees making it seem to be raining as well. My umbrella came in really handy, using it as you would any umbrella and avoiding having to wear my rain jacket hood; and as a cover to open/close my pack.

Planning on two and a bit days to reach Trout Lake I was thinking my next few days would be pretty cruisey. Unfortunately while perusing my maps during an afternoon snack break I realised I’d actually miscalculated the distance. I thought it was 66 miles. Turns out it’s actually closer to 90 miles and would take three days!

There are several roads that lead into Trout Lake and in planning this next section I’d used the wrong road as a marker and misjudged the mileage.

I had food for two full days, today inclusive and the morning of a third but that was it. Right then I realised my leisurely days were no more. I would have to push out to 30 or more today and go massive tomorrow to narrow the margin to town.

You idiot I thought. Nothing could be done about it though. I had to plug on. At least it’s down hill.